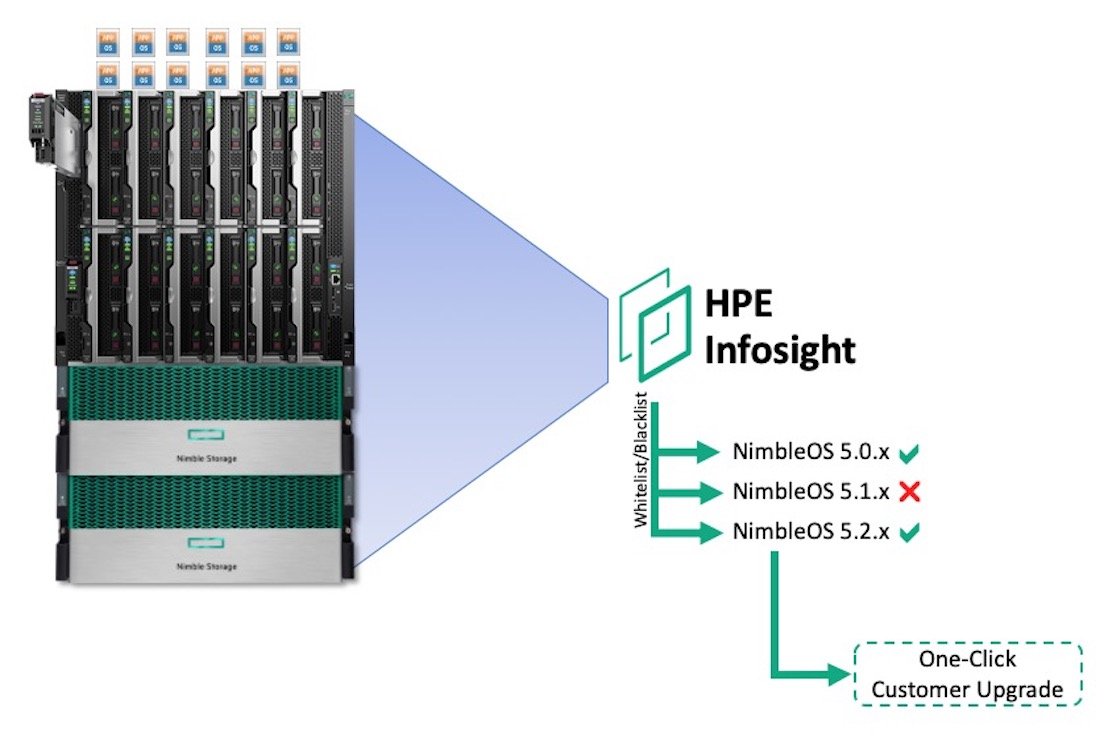 A new feature has just been rolled out into HPE Infosight for Nimble customers and is now live in the portal for everyone to consume – specifically around Nimble software updates, and self-servicing preferences for NimbleOS release cycles & update requirements.

If you’re already a Nimble customer, you’ve probably heard of the terms “whitelisting” and “blacklisting”. This is the concept of using Predictive Analytics and AI-Ops in order to guide individual systems to their own customised yet correct upgrade path in order to mitigate known or problematic bugs.

NB: HPE Nimble Storage is deprecating the terms whitelist/blacklist and moving towards a new naming terminology called Allowlist & denylist. This article and all future articles now reference the new terminology.

Based on the information heartbeated from every system, Infosight presents the right options for upgrades… but most importantly this process & upgrade recommendations is a 100% customised process delivered per system – as every system is completely different.

Alongside allowlist & denylists being maintained for each release to ensure customer protection, Nimble Support & Infosight also tightly control the rollout and availability for every NimbleOS release by iterating the code through different milestones of availability – again to protect customers:

It’s often common for new features and functionality to be available in a software release which is still running as GA Candidate – and customers that wish to obtain that new feature are asked if they want to upgrade to make it available. (I’ll go into the release process in more detail in another blog).

Back to the purpose of this blog: It’s now possible for you, as the Infosight administrator, to designate which criteria of NimbleOS release cycles you want to have made available to each of your systems.

Why is this important?

You many have a couple of Nimble systems which are dedicated for a mission critical application, such as ticketing, or healthcare needs. You want to ensure that the systems are always available – and aren’t willing to trade off availability whatsoever. Therefore, your systems would most likely be a good candidate to be running LTSR code – which is ultimately as close to watertight as you can get, with a 2 year support cycle.

You then may also have a couple of other Nimble systems which are running your general purpose VMs and workloads. Here, you’re happy for doing the non-disruptive upgrades when needed, and you want access to the latest features. You may designate these systems to be candidates for running GA Candidate – which we fully support for production use, but don’t recommend them for mission critical workloads.

How To Set Upgrade Preferences?

Jump into HPE Infosight, and you’ll notice you have a new green beacon against the Nimble Arrays sub-tab under Storage Infrastructure:

When you click the beacon, it’ll break you out into a little wizard which will help guide you through this new feature, and you can take a tour should you wish:

Doing the work ourselves, if we head into the Arrays sub-tab, we can select an array we want to view, which drops us into the hardware – as well as upgrade recommendations screen. Here, we detail which software updates are recommended for the platforms – and what their Release Status designation is, as well as the required upgrade path.

There is now a new “Release Status” tab, and when that is clicked, it allows you as the user to define which types of Nimble software updates should only be made available to your system. By default LTSR and GA are selected – but you can also opt in for GAC and IPR code should you wish.

When this selection is confirmed, HPE Infosight will then proceed to use your software recommendation preferences and needs when selecting and recommending the correct upgrade path for each individual system you have (if selected, you will notice a little warning that we don’t recommend IPR or GAC code for mission critical systems).

These preferences are saved and will be used when displaying software recommendations in Infosight. The preferences are also used to dictate releases exposed on the array itself (e.g., Download in the GUI or software –list in the CLI) – based on a combination of valid update paths, release status, denylists, allowlists, and preferences.

Who Can Make These Settings?

Only Infosight users designated as administrators within your Infosight organisation within the portal will be able to make this change.

How can I see Who Made The Changes?

Head to Infosight->Resources->Nimble Storage->Audit Report, where we show a full audit trail of everything within Infosight, including which user made changes using this feature in the portal.